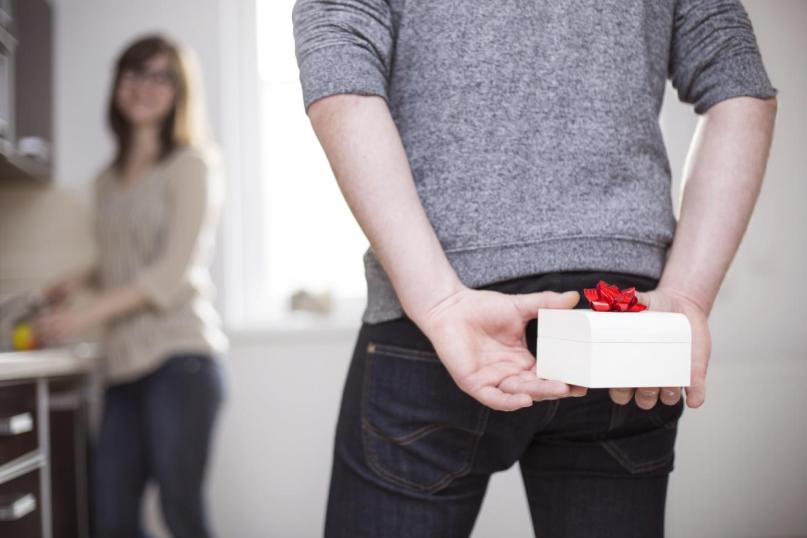 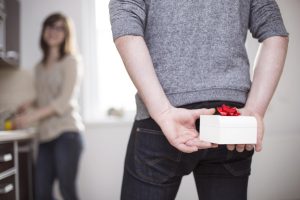 So ... it’s your anniversary coming up and you’re thinking about buying your loved one a present. But, what should you buy? Follow tradition or make it your own way? Here we’ll explain where the traditional lists for each anniversary come from and provide some brilliant ideas for gifts that you can take inspiration from.

Experts cannot pinpoint the exact moment in time when gifts were given to celebrate anniversaries; it seems to originate in Ancient Rome or medieval Germany but there isn’t any firm evidence to support this. But, evidence does show that by the 18th Century, in Germany, couples would give silver wreaths to each other to celebrate their 25th wedding anniversary and a gold one would be given at 50 years. In English societies, we can see evidence of this in the 1800s. It was during the Victorian period that people began to marry for love and not just because it was a ‘good match’. Originally this idea of marrying for love was met with confusion and some were against it. However, it did take off and people began celebrating their big anniversaries with the silver and gold wreaths as mentioned above. Originally, anniversary gifts were intended to help the couple maintain their feelings of affection towards each other and to celebrate their long lives. Originally women were seen as the ones who maintained the marriage and kept it harmonious so their gifts were more important than the men’s gifts.

Where Did the List of Things to Give for Each Anniversary Come From?

In the 20th century this list was made more concrete. In 1937 The Jewelers of America made the list more concrete, and as they had a vested interest in selling precious stones and metals, they added more gemstones and metals to the list. Those interested in the properties of such metals and gemstones have later added symbolic meaning to each of the stones listed. This symbolism is intended to bring the couple closer together. 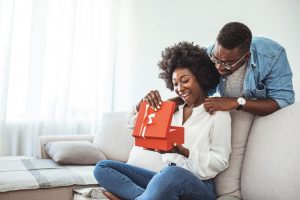 Some items on the list seem quite strange and unusual, but they can be used as inspiration for you to choose a gift that is unique to your relationship. This can be helpful if you’re struggling to find your perfect gift. Other items are easier to find a gift that coordinates. Lots of people don’t follow this list religiously and some will use it creatively. Perhaps print some coupons for chores around the house on some paper for your first anniversary! Or personalise a cushion or throw for your second anniversary. The point is: show your partner how much you love them and how special they are to you! And as each year increases, the gifts get better and better! But if you want to start big, then I don’t think you’ll hear any complaints! 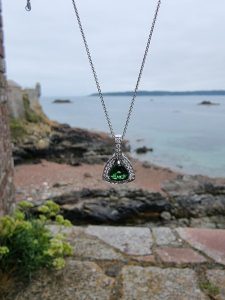 The choice is yours about whether to follow the list above or not for your anniversary gifts. But an anniversary gift should show your love and commitment to your partner and symbolise the two of you as a couple reaching a milestone. This milestone could be the arrival of children for example and may not necessarily fall on your wedding anniversary date. These gifts signify where you started out, your journey together and how far you have come. They are also about your future together.

How to Wear Anniversary Rings for Her

For ladies, an anniversary ring for her could be an eternity style band stacked with her engagement and wedding ring. Or it could be worn on the other hand. It could be the same style of ring as her wedding band and/or engagement ring or it could be something completely different. It could share the same stones as her wedding band/engagement ring or it could be something contrasting. You could choose to place a hidden stone in an anniversary ring for her or choose a mixed metal design. The choices are endless and that can make the process of choosing something quite daunting.

Further ideas for you to consider are whether her existing rings are quite plain, in which case, maybe the anniversary ring for her should be more embellished? Perhaps you could choose the amount of stones included in the ring to symbolise each year you have been married? Could she stack her anniversary rings each year creating a different look? And, a controversial thought, perhaps she may want to modernise her existing ring or rings to create a new ring that symbolises your relationship? This is a conversation that you may need to have. For more information on eternity rings, read our blog ‘How to Choose the Perfect Eternity Ring’.

Diamond Ring for Your Wedding Anniversary

Although diamonds are all the way at 60 years on the list, lots of people like to buy diamond rings for your wedding anniversary. Here is a classic example of a half eternity ring. It’s beautiful with 18 baguette shaped diamonds encrusted on the band. Choose our Classic Half Eternity Ring to wear on the same finger as your engagement and wedding bands or wear it on a separate finger. It is a classic look so it will coordinate with most other jewellery. You could particularly choose this ring if you have a baguette shaped diamond in your engagement ring or wedding band. The simplicity of this ring will accentuate your wedding jewellery without outshining it! 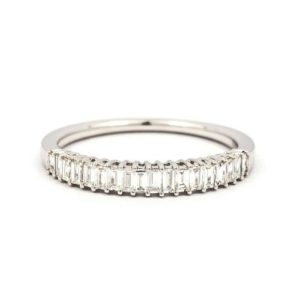 Another option for a diamond ring anniversary gift is our Diamond Eternity Band which is a half eternity band again but has a very different look to the one above. This ring contains a whopping 61 small round brilliant diamonds for the ultimate shine and sparkle. This ring has a more rounded feel to it and has a comfort fit band which is perfect for every day wear. This ring is perfect for someone who does like plenty of sparkle and a more contemporary feel. Again, depending on her engagement ring and wedding ring size and her finger size, you could wear this with the existing jewellery or on a separate finger. 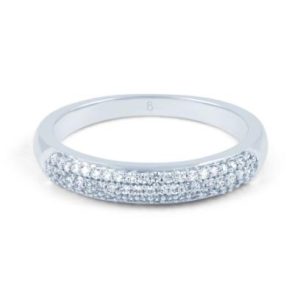 For a different take on a diamond ring anniversary gift, take a look at our Diamond Designer Full Eternity Ring. This intricately designed woven ring includes 105 small round brilliant diamonds for the ultimate shine. This is a really popular design for those who want to wear their anniversary gift on a different finger or hand. It is a stylish and modern design that makes a statement and an elegant ring that demands your attention. 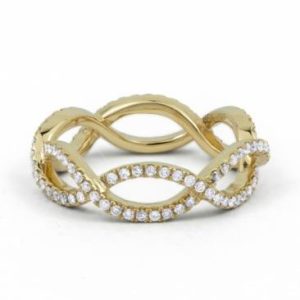 But, let’s not leave out the husbands! Why not give your husband a diamond ring anniversary gift to show him how special he is? Perhaps he would wear it on his right hand? Our Rubix Diamond Illusion Ring is an ultra slick example of an icy white contemporary design for him. The simple design co-ordinates with other rings effortlessly. It contains four princess cut diamonds which make it a really special ring that brims with style and sophistication. He’ll love it!

All of our rings are available in yellow gold, white gold, rose gold and platinum to allow you to co-ordinate your new ring to your existing ring/jewellery collection. And, for more information about cleaning your diamond rings, read our blog entitled ‘How to Clean your Diamond Engagement Ring: A Guide’. 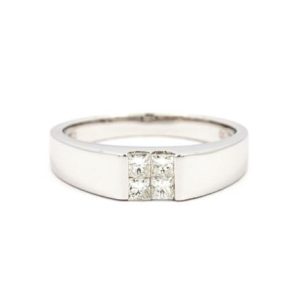 Let’s get back to the list for some more inspiration. Below we’ll take a look at the 30th wedding anniversary item which is a pearl and the 40th (ruby), 45th (sapphire) and the 55th (emerald).

We have some really special items for you to give as gifts for the 30th wedding anniversary. Below are three different earrings that contain a pearl (more are available). The first drop style earring is our Cultured Diamond and Pearl Earrings the second is a stud style: Cultured Pearl and Diamond Stud Earrings and thirdly a pearl earring that also features another precious stone, in this case an amethyst, but other gemstones are available in these earrings: Diamond, Pearl and Amethyst Earrings. What lady wouldn’t fall in love with any of these earrings? She would definitely feel loved and special being given a gift like this!

Pearl jewellery is delicate and inspired by the finer things in life. These earrings are the epitome of elegance and luxury. Coupled with small round brilliant diamonds and or other precious gems these earrings are graceful and divine.

Imagine presenting her with a set of these special earrings! Each set contain a dazzling gemstone surrounded by either round brilliant diamonds or baguette shaped diamonds for exceptional sparkle. Take her for a special meal and present her with one of these sets of earrings. She will love them forever. Perhaps she could wear them at her anniversary surprise party? You decide!

Our last offerings for anniversary gifts are our pendants. Although amethyst and aquamarine are not featured in the list of anniversary items, these are really special gemstones that she may love for their exceptional colours. Choose between our Amethyst Halo Pendant and our Aquamarine Halo Pendant. These classic, simple pendants would accentuate any outfit and provide a focal point to draw the eye in. They are elegant and timeless and can be worn for everyday activities or for those special occasions. For more information about the amazing aquamarine gemstone, see our guide ‘The Aquamarine Gemstone’ here. 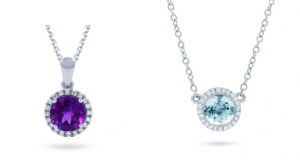 Hopefully, we’ve given you some information that makes it clear where giving anniversary gifts came from. We’ve set out which gifts are given when but also stated that actually, this is merely inspiration for you, and if you wish to choose to give a gift that is not on the list and a time that isn’t stated on the list either, that’s entirely up to you. And here at DB, we know that your partner will love you for it! All of the items of jewellery featured here can be purchased in yellow gold, white gold, rose gold and platinum. And if that wasn’t enough choice, lots of the styles that you’ve seen here can be purchased with different gemstones in them. And even further to that, if you have your own design in mind that isn’t on our pages, then you can contact us here to find out about our bespoke service where you can design your own piece of jewellery for an anniversary gift. Happy anniversary shopping!