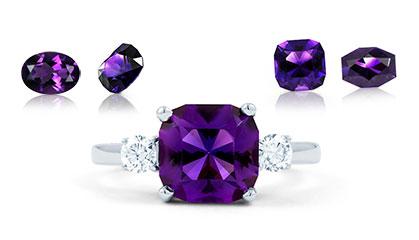 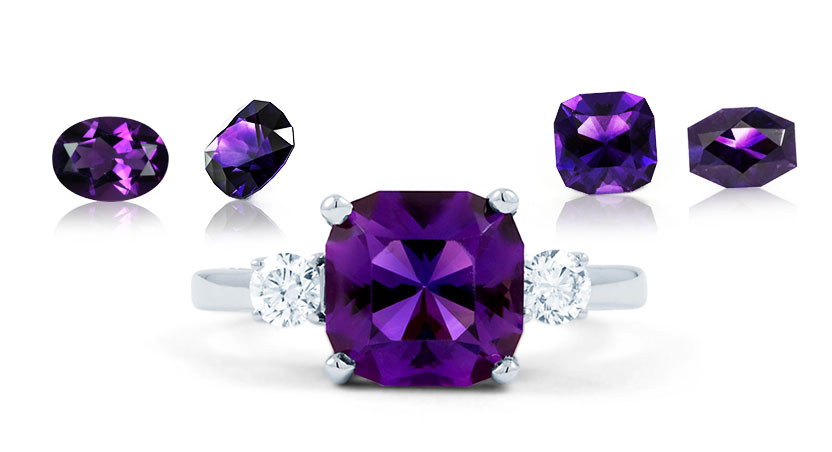 A popular choice for a christening present for children born in February under the star sign of Pisces, amethyst is also often used as a gemstone in eternity rings and engagement rings. Amethyst was at one time perhaps one of the most highly regarded gemstones due its supposed healing and protective properties, as reported by both the ancient Egyptians and ancient Greeks and Romans. History Once considered to be one of the most valuable gemstones, along with emerald, diamond, sapphire and ruby, amethyst was popularly used in antiquity for intaglio engraved gems, such as cameos and seals for letterheads.  While the ancient Egyptians believed that it would protect the wearer from self-deception, the ancient Greeks gave the gemstone the name amethyst, with its literal meaning of ‘not intoxicated’, as they believed it contained properties which would prevent the wearer from getting inebriated. Wine goblets from the time were often carved from amethyst. Origin Amethyst can be found and is produced in many locations worldwide, including Ontario and Nova Scotia in Canada, several locations across the United States of America, India and South Korea. The southern African country of Zambia produces in excess of 1000 tonnes of amethyst annually, making it one of the largest producers of the gemstone worldwide. Amethyst from the Ekaterinburg district in Russia is often considered to be the finest quality of the gemstone available. Amethyst was considered to be one of the five ‘Cardinal’ gemstones – the most precious of all gemstones – until extensive deposits were located in South America in the mid 18th century, in particular Brazil where the gemstone is primarily found within volcanic rocks. Treatment If amethyst is overexposed to light it can experience tonal fading, however it can also be darkened artificially if it is subjected to a sufficient amount of irradiation. Mineral Amethyst is a type of quartz and can be found in varying primary hues, from deep purple through to pale pink and can exhibit both blue and red as secondary hues. The highest grade of amethyst quartz is called ‘Deep Siberian’ and contains a primary purple hue of about 75-80% and a secondary blue and red hue of 15-20%. Mohs Scale As a type of quartz, amethyst is marked as having a Mohs scale of 7, making it quite a strong gemstone. However, amethyst with a significant level of impurities will have a lower placing on the scale. Care Amethyst, being a reasonably hardy gemstone, is best cared for by light scrubbing with a soft brush dipped in a mixture of mild detergent and warm water. Birthstone While it is rare to see amethyst used in wedding rings it has found popularity in eternity rings and, to a lesser extent, engagement rings. Perhaps the most common use of amethyst is as part of a christening gift as it one of the Gregorian birthstones for the month of February and star sign of Pisces. For each month of the Gregorian calendar there is a small poem which speaks of the birthstone for that month – with the February poem stating “The February-born shall find Sincerity and peace of mind, Freedom from passion and from care, If they an amethyst will wear.”
Previous
BLOG CATEGORIES
BLOG ARCHIVE