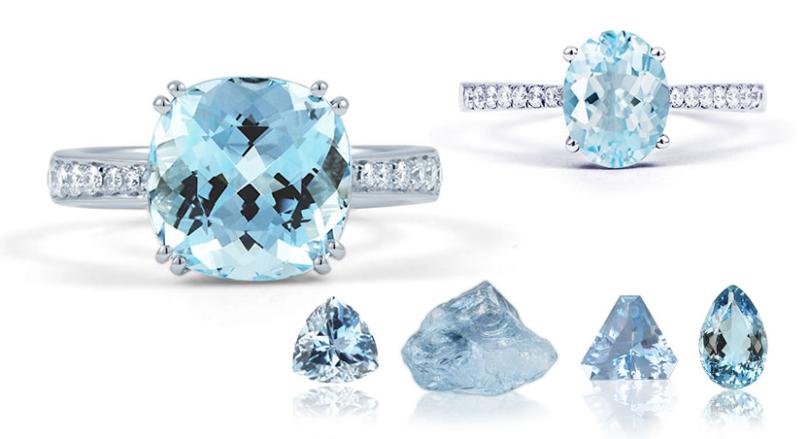 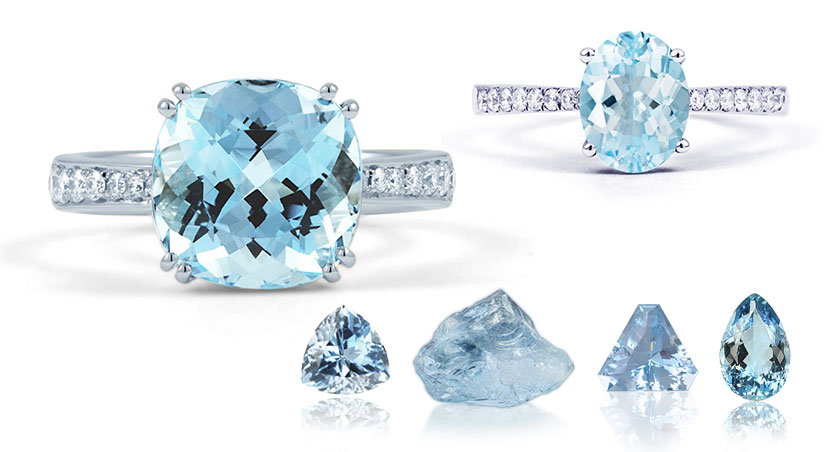 A popular and durable gemstone used often in engagement rings and eternity rings, aquamarine is believed to bring health and happiness to the wearer. Aquamarine is mined in several locations worldwide including Brazil, Russia and the United States. Aquamarine which is mid to deep blue in hue has a higher value than the more common lighter toned aquamarine gemstone. History The history of aquamarine, as told through myth and folklore, dates back to the ancient Greeks and Romans, who held the gemstone in high regard. The name aquamarine comes from the Latin for ‘water of the sea’ and was (and still is) the lucky stone of sailors. The ancient Egyptians believed aquamarine to be a symbol of everlasting youth and happiness and according to medieval folklore it was believed that by simply wearing the aquamarine gemstone one would be protected from poisoning. This belief made the gemstone incredibly popular with royalty throughout Europe. Origin Aquamarine can be found in locations all over the world with the largest producer of the gemstone being Brazil, which is home to many prominent mines. It was in the Minas Gerais mine in Marambaya in Brazil in 1910 that the largest single stone of aquamarine was found, weighing 243lb. In addition to Brazil, Pakistan, Burma, Russia, Zambia, Madagascar, Mozambique and the United States all have significant aquamarine mining operations. Treatment It is common for the naturally paler hued aquamarine to undergo heat treatment in order to produce a deeper blue gemstone. In order to achieve the right shade of blue the stone is heated to a temperature of between 400 – 450 degrees C. Mineral Aquamarine, along with Emerald, Morganite and Heliodor, is a member of the Beryl family of mineral. Its hues range from pale light blue through to blue, and blue with a green tint. Aquamarine gemstones of mid to deep blue are the rarest type and therefore command a higher monetary value compared to the more common, paler hued aquamarine gemstones. Mohs Scale With a grading on the Mohs scale of 7.5-8, Aquamarine is a very strong gemstone and as such lends itself to pieces of jewellery which are worn regularly, such as necklaces, earrings and rings – in particular aquamarine engagement rings and aquamarine eternity rings. Care Aquamarine is considered to be a reasonably hardy gemstone, however it is susceptible to accumulations of dirt and grit caused by every day wear and tear and the use of hand creams. Gentle washing with a mild form of detergent will help to keep aquamarine in good condition. Additionally, if exposed to prolonged periods of sunlight, aquamarine can lose some of its vibrancy and become paler. Birthstone It is traditional for a piece of aquamarine jewellery to be given as a gift on a couple’s 19th wedding anniversary and as a christening present for children born in March.
Next Previous
BLOG CATEGORIES
BLOG ARCHIVE