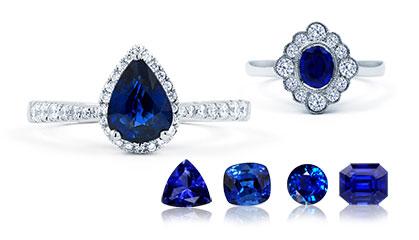 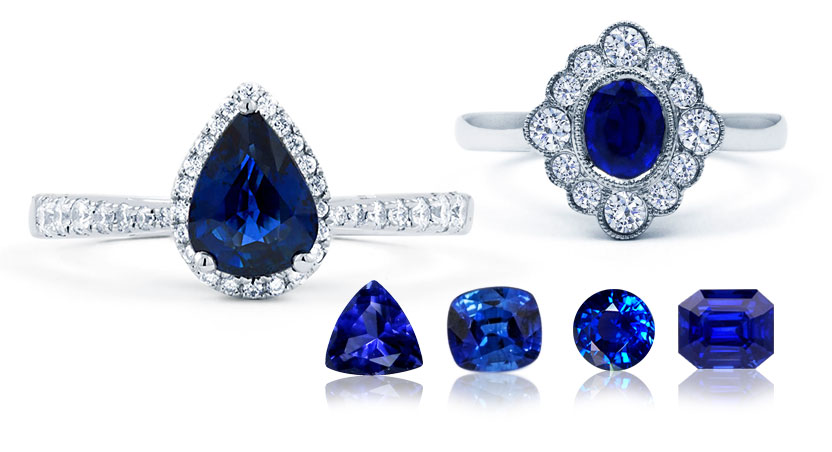 The blue sapphire is a stunning, deeply-coloured gemstone whose use can be traced back to ancient Persia. The beauty of this gemstone has led to blue sapphire engagement rings fast becoming the popular choice amongst celebrity and royal weddings, but it is also a popular choice of gemstone for wedding and eternity rings.
History The history of the blue sapphire is a rich one that cannot be accurately pinpointed to any one period. The peoples of ancient Persia believed the deep blue stone to share a commonality with the sky thanks to its matching deep blue hues. Ancient priests and druids believed the gemstone acted as a powerful talisman, which would grant them the ability to communicate with oracles. Evidence exists today that shows the Romans heat-treated blue sapphires to help improve the stone’s colour. Today, the gemstone is still highly regarded and used in many forms of jewellery, and many famous royal engagements have included a blue sapphire engagement ring. While sapphires are used in all types of jewellery, blue sapphire engagement rings are a popular choice amongst celebrities and royalty. As with many coloured gemstones, blue sapphire eternity rings are also a common item of jewellery, perhaps more so than wedding rings. Origin Blue sapphire is mined in a number of locations around the globe, most notably Tanzania, Thailand, Mozambique, Australia, Sri Lanka and Montana in the United States. Treatment Untreated, naturally flawless blue sapphires are extremely rare, and therefore most sapphires undergo a treatment process that entails heating the gemstone of temperatures in excess of 1000 degrees Celsius. During the heating process, the sapphire’s blue hues become deeper in colour, making the stone more attractive and acceptable for use in jewellery. Blue sapphires may also undergo a form of diffusion treatment, in which beryllium is merged into the sapphire under high temperatures to enhance its colour. Mineral Blue Sapphire is formed from the rock forming mineral Corundum. Trace amounts of a variety of other elements including copper, chromium, magnesium, iron and titanium are what gives a sapphire its distinctive colour. In addition to the blue gemstone, sapphires range in a variety of shades including green, pink, yellow, orange and purple. A blue sapphire’s secondary hues vary. While its primary colour is obviously blue, its secondary hues may exhibit varying shades and saturations that affect the lightness, colourfulness and shade of the gemstone. When a blue sapphire’s value is evaluated the intensity of its primary hue is usually the determining factor, but secondary colours of purple and violet can contribute greatly to its allure, with gemstones exhibiting around 15% purple or violet hues generally considered to be of excellent quality. Secondary colours may also exhibit green and grey, both of which are generally considered to be a negative trait, with green negatively clashing with the primary blue and grey reducing the overall saturation or brightness. Ultimately, quality blue sapphire jewellery should boast a gemstone whose primary hue is at least 85%, with a secondary hue of no more than 15%, exhibiting neither green nor grey. Mohs Scale Blue sapphire, along with its primary mineral Corundum, is one of the hardest gemstones available and as such has a Mohs scale rating of 9. Care Being such a hardy gemstone, blue sapphire normally only requires a gentle wash with water and a mild detergent, such as everyday washing up liquid, to help remove any build-up of dirt and grime Birthstone Sapphire is the traditional gemstone for the month of September. The gemstone belongs to no one astrological sign in particular, although traditionally blue sapphire belongs to the planet Saturn, which rules over the signs Capricorn and Aquarius.
Next Previous
BLOG CATEGORIES
BLOG ARCHIVE