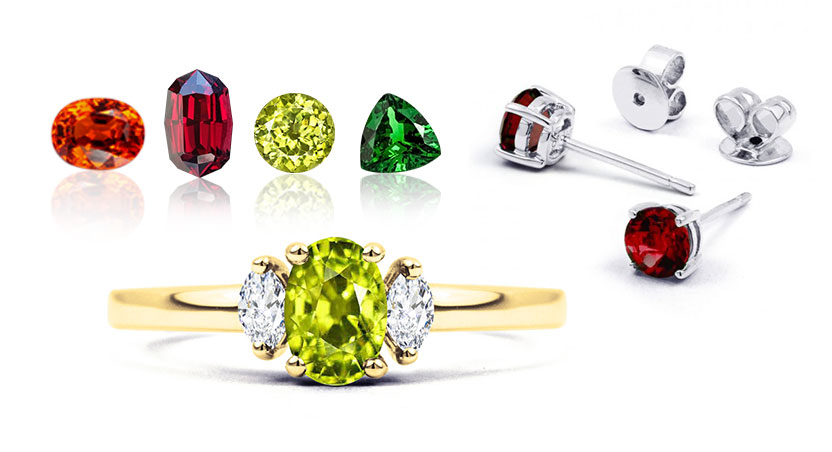 Widely used in Roman times as both an abrasive and for use in jewellery, garnet has long been a revered gemstone. There are many varieties of garnet; indeed, garnet is actually a group of minerals, each of which exhibits its own unique characteristics. The colour of garnet varies considerably, from totally colourless specimens, to vibrant olive-greens, stunning reds, black, and the rare blue variety. History Garnets, which are a group of silicate minerals, have been used since the early Bronze Age as both an abrasive and a gemstone. During the Late Antique Roman period, red garnets were a particularly popular choice of gemstone, amongst both Roman citizens and the invading Barbarian hordes who pillaged much of Europe at the time. As such, many items of ancient Anglo-Saxon garnet jewellery have been uncovered in British archaeological excavations. Today, garnet rings and necklaces are both popular forms of jewellery. Origin There are many forms of garnet and different varieties are mined throughout the globe. Grossular garnet, specifically the tsavorite variety mentioned in more detail below, can be found in Tanzania and Kenya. Rhodolite garnet, which is formed from the mineral pyrope, is mined only in North Carolina in the United States. Blue garnet is predominantly mined in Madagascar, but can also be found in parts of Russia, Kenya, Turkey, Tanzania and other areas of the United States. Mineral There are various forms of garnet, each of which boasts its own unique properties. The gemstone can be found in various colours, including orange, red, yellow, green, purple, blue, black, brown, pink, as well as some colourless varieties. Grossular garnet, a calcium-aluminium mineral, can be found in shades of brown, yellow, red and green, but rarer forms of colourless grossular have also been mined. The most common form of grossular garnet is called hessonite – a yellow-coloured mineral that is a typically less desirable variety due to its lower density and hardness. Tsavorite, the most popular form, is a strikingly olive-green coloured gemstone that derives its colour from trace amounts of chromium or vanadium. Viluite, another form of grossular, is an olive-green variety but can also be found in hues of browns and reds. Rhodolite garnet is a reddish, rose-pink variety from the mineral pyrope. Rhodolite’s predominantly rose-like colour is derived from its chemical makeup of iron, magnesium and aluminium. Blue garnet is the rarest type of garnet, being a unique variety that comprises characteristics of both pyrope and spessartite. Its comparative rarity has led many to wrongly assume that blue garnet does not exist naturally. Treatment Garnet in all of its varieties is not typically treated. Garnet for use as a gemstone is always natural and pure. Mohs Scale The Mohs scale of garnet varies between 6.5–7.5 depending on the variety. Care Garnet is a relatively hardy gemstone and can be cleaned using a soft brush and warm, soapy water, before rinsing the stone afterwards in lukewarm water. Garnet should never be exposed to high heats, and as such should never be steam cleaned. Whilst some forms of garnet can reach a 7.5 on the Mohs scale, never wear garnet jewellery whilst carrying out physical tasks that could cause damage to the gemstone. Also avoid exposing the mineral to chemicals. Birthstone Garnet is the birthstone for the month of January, and is traditionally said to provide the wearer with loyalty and constancy. In astrology, garnet belongs to the star sign Aquarius.
Next Previous
BLOG CATEGORIES
BLOG ARCHIVE