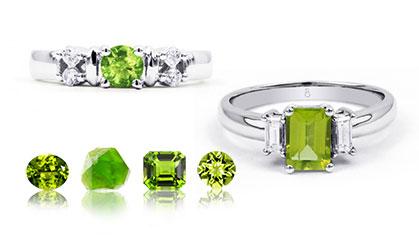 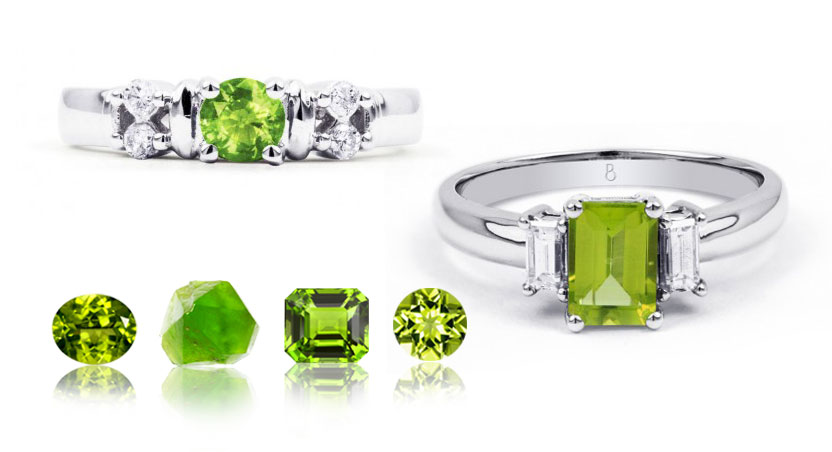 Formed deep underground, Peridot is a rare gem that exhibits yellow-green to olive brown hues. Revered in the Middle Ages for granting those who wore the gemstone the power of foresight, today Peridot is used in all kinds of jewellery, from Peridot earrings, to Peridot engagement rings. History The stunning yellow-green gemstone Peridot is a historically elusive gem. According to some sources, Peridot was revered in the Middle Ages as a gem thought to grant the wearer the power of foresight, and is mentioned in the Bible under the name “Pitdah”. It is thought that the ancient Jewish High Priests mentioned in the Bible wore Peridot in their sacred breastplates. Like most gemstones, Peridot rings make for a highly coveted item of jewellery for weddings, although Peridot engagement rings tend to be more popular. Peridot earrings are extremely popular gifts, particularly for anniversaries. Origin Peridot forms in molten magma before being brought to the surface through either volcanic or tectonic activity, before it is found in rock and subsequently mined. The volcanic island of Zabargad, located in the Red Sea, was historically the primary source of all Peridot and was heavily mined for over 3000 years before being rediscovered again in 1900 and the deposits subsequently exhausted. Today, the most important deposits are located in Mogok in Burma and in Pakistan, the latter of which mines some of the world’s highest quality Peridot gemstones. . Other important sources include Vietnam, China, the United States and India, the latter of which is estimated to produce up to 95% of the world’s supply of gemstone-quality Peridot. Treatment Peridot gemstones are never treated as there is currently no known method of improving their clarity or colour. As such, Peridot gemstones are always 100% naturally-formed and have not been processed in any way. Mineral Peridot comes from the mineral Olivine which is made up of magnesium, silicon and iron. Peridot is known as an “idiochromatic” gem, which means its colour is derived from the chemical compounds of the stone itself, unlike most other gemstones whose colour is determined by their impurities. As a result, Peridot is one of the few gemstones that exhibit just one colour. Peridot is always a greenish-yellow to olive-brown, with the exact hue of each gemstone varying slightly depending on the amount of iron contained in its crystalline structure, as it is this chemical element that gives the stone its deep green colour with a hint of gold. Peridot gems that boast dark, olive-green hues are generally considered the finest and are therefore considerably more valuable. The best Peridot colour tends to be produced in gemstones that have an iron percentage of less than 15% and include chromium and nickel as trace elements. Mohs Scale Peridot has some strength to it but is susceptible to damage from other, hardier, gemstones and as such as be given a placement of 6.5-7 on the Mohs Scale. Care For gemstones with a Mohs Scale rating of below 7 the recommended care routine  involves gentle cleaning with a soft cloth. Birthstone Peridot is the birthstone of August, and whilst the gemstone is associated with several signs of the zodiac, it is mostly associated with the astrological sign of Libra.
Next Previous
BLOG CATEGORIES
BLOG ARCHIVE