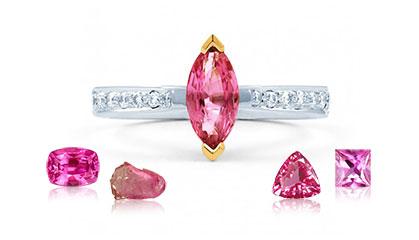 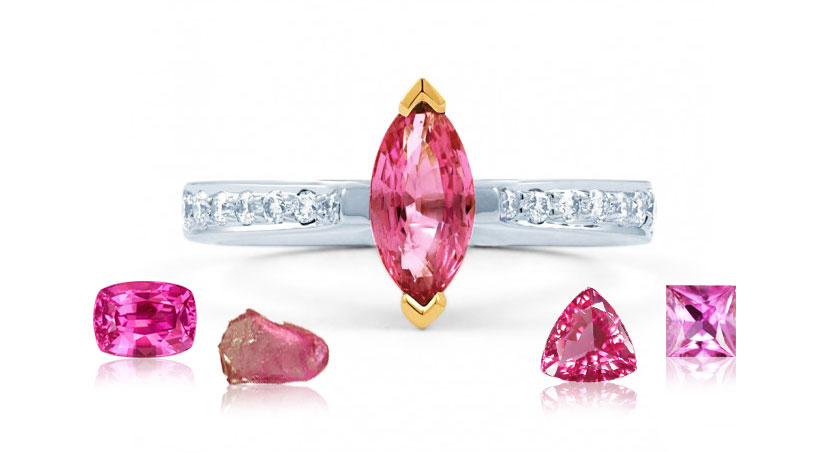 The curious pink sapphire is a naturally-occurring form of sapphire that gets its pinkness from the chromium in which it was formed. Mined predominantly in Madagascar, the pink sapphire is a popular gemstone for engagement and wedding rings.
History Little is known about the historical use of pink sapphire as there is very little mention of the stone in historical texts. It is generally understood that any historical mention of a sapphire is actually referring to blue sapphire. Today, pink sapphire jewellery is a popular choice for engagement, wedding and anniversary gifts. Origin Up until the 1990s pink sapphires were considered a particularly rare gemstone and could be found only in limited amounts in Myanmar and Sri Lanka, until new, abundant, deposits were discovered in Madagascar, in which most pink sapphire is currently mined. Treatment Contrary to internet lore, pink sapphires do exist naturally and are not a product of artificial treatment. As with most sapphires, a naturally flawless pink sapphire is very rare and therefore most undergo a heat treatment process to improve their primary and secondary hues, often with the aim of reducing purple undertones and making the gemstone a deeper pink. Unlike blue sapphires, which undergo heating at extreme temperatures in excess of 1000 degrees Celsius, pink sapphires are heat-treated at a comparatively lower temperature of 400 degrees Celsius. This lower temperature reduces the risk of affecting any inclusions and subsequently damaging the stone. Mineral The hues of a pink sapphire vary from stone to stone, depending on the mineral in which the stone was formed. In the case of sapphire, the gemstone is formed in the mineral corundum, which is derived from aluminium oxide and can be found in various colours, including pink. The pink variety of sapphire gets its colour through traces of the chemical element chromium – higher levels of this element can lead to the gemstone becoming blood-red in colour, in which case the gemstone is technically a ruby. Some pink sapphires exhibit very deep pinks and others very pale colours. Others may exhibit secondary hues of purplish and reddish tones, often producing a stone that is “bubble gum pink” in colour. Pink sapphires that contain traces of titanium can also exhibit deeper purple hues. Mohs Scale As with all forms of corundum, pink sapphire has a Mohs scale of 9 and is therefore a hardy gemstone, being only one point lower than diamond. Care Pink sapphire is a hard gemstone and cannot be scratched or damaged as easily as other gemstones. Care should still be taken however when cleaning sapphire. Warm, soapy water is recommended in most instances. Being quite resistant to heat, pink sapphire can also be steam-cleaned, but avoid doing so if the gemstone has a fracture or any inclusions as this can cause the stone to shatter. Avoid cleaning the gemstone with or wearing the gemstone whilst using chemicals, as doing so may damage your settings. Birthstone The sapphire is the birthstone of September and rules over no one astrological sign in particular, though traditionally it creates luck for those born under Taurus, Libra and Pisces.
Next Previous
BLOG CATEGORIES
BLOG ARCHIVE