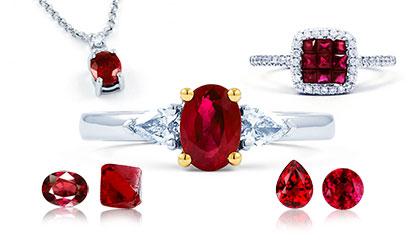 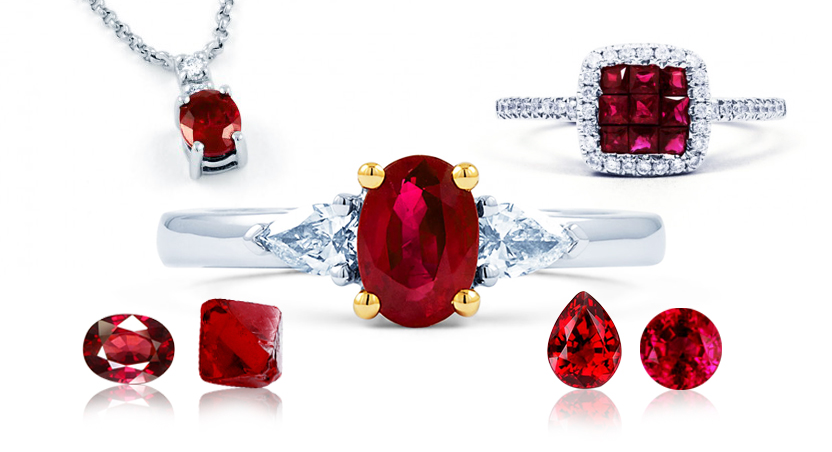 Famous for its deep and enticing reds, the ruby is one of the world’s four precious stones. Ruby wedding rings are a popular choice amongst newlyweds thanks to the gem’s rich colour, but are also a coveted option for eternity and engagement rings. History The blood-red ruby has long been an esteemed gemstone, traded as early as 200BC in China where rubies were carried westward through the North Silk Road. Historically, the ruby was always held in high regard in Asian countries, predominantly worn by noblemen in China and India. In these countries, rubies were also placed beneath a building’s foundations as it was believed the stone would bring good fortune. Origin Quality rubies are mined throughout the world and new deposits are regularly discovered. The Mogok Valley in Burma is perhaps the most notable location from a historical perspective and in terms of the quality of ruby mined there, although in recent years very few fine rubies have been found in the region. The Republic of Macedonia, which produces a unique form of raspberry-coloured ruby, is currently the only country in Europe to produce naturally occurring forms of the gemstone. Other locations where the gemstone is currently mined include Kenya, Mozambique, Afghanistan, India and even the United States. Treatment Most rubies undergo some form of treatment to improve their lustre, transparency, and to remove unwanted inclusions.  Heat is the most common treatment process; the stone is exposed to heat of around 1800 degrees Celsius to improve the ruby’s colour and remove blue patches and silk growths. Some rubies will also be filled with lead glass, which can improve the gemstone’s transparency and make a previously undesirable ruby ideal for use in jewellery. Mineral Ruby is a variety of the mineral corundum, and the stone gets its deep, blood-red colour from higher levels of chromium. The gemstone is also the third hardest natural gemstone on the planet, the strongest being moissanite and diamond. The structure of ruby is unique in that it absorbs light in the yellow-green part of the visible light spectrum, greatly enhancing the red luminescence of the gemstone. There is no such thing as a naturally perfect ruby, as all exhibit some level of colour impurities and inclusions. Naturally-occurring rubies are particularly prone to a specific form of inclusion known as “silk”, which is a needle-like mineral growth that is often used to determine whether the gemstone was naturally formed or a synthetic substitute. Rubies are valued in much the same way as diamonds, using the Four Cs as a basis by which to determine each gem’s worth. A ruby’s origin and size will also have some bearing on its worth. However, being a coloured gemstone, a ruby’s colour is nearly always the most important factor in determining its worth, with the finest rubies exhibiting primary hues of rich reds. Secondary hues of orange, pink and purple are common, although purple is the preferred colour as it produces an overall richer red. Mohs Scale Thanks to their strength rubies are positioned at 9 on the Mohs Scale, with only diamond and mossanite being placed higher up. Care When worn regularly jewellery containing rubies should be gently cleaned with a soft brush, such as a toothbrush, dipped in a solution of washing-up liquid diluted in warm water. Rubies stored within jewellery boxes should, ideally, be kept away from harder gemstones, such as diamonds, which have the potential to scratch or chip. Birthstone Ruby is traditionally the birthstone of the month of July, and belongs to the astrological sign of Cancer.
Next Previous
BLOG CATEGORIES
BLOG ARCHIVE