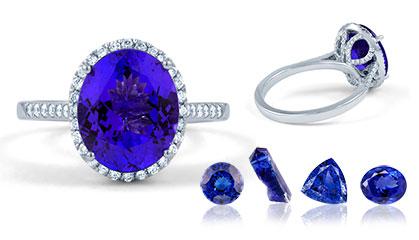 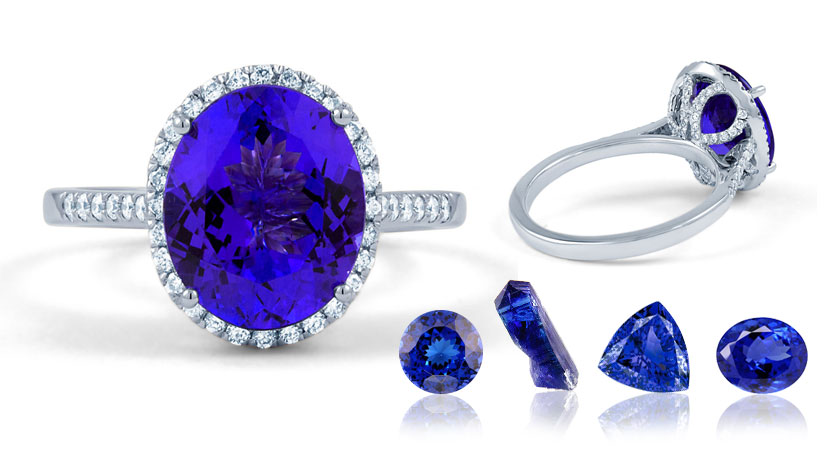 Found in only one location on the planet, Tanzanite is an exclusive coloured gemstone mined from Mount Kilimanjaro in Tanzania. The “multi-dimensional’ qualities of Tanzanite jewellery produce a unique shimmering hue that makes it a popular gemstone in engagement and eternity rings. History Despite forming some 585 million years ago, Tanzanite was only discovered in 1967. A Goan tailor, who originally mistook it to be a type of peridot, first discovered the gemstone in Tanzania. The tailor quickly realised that the strikingly coloured mineral was not peridot, but rather something completely unique and, after the gemstone was correctly identified as a variety of zoisite, it was soon marketed by Tiffany & Co under the name Tanzanite. Origin Tanzanite is unique in that it is sourced from only one location on the planet: Mount Kilimanjaro in Tanzania where it was first discovered. The site where the gemstone deposits are located spans an area just four kilometres long and two kilometres wide, and is divided into areas named ‘Blocks A to D’. The largest of these blocks – Block C – is fully controlled by TanzaniteOne – the world’s largest supplier – with the remaining Blocks mined mostly by independent local miners. Treatment Tanzanite is nearly always heat treated after being mined to greatly enhance the gemstone’s hues, at which point the stone becomes dichroic (the gemstone appears to display varying colours dependent on the light source). Heating tanzanite is commonplace, and there is no difference in price between a treated tanzanite gem and an untreated one. Recent developments within the tanzanite industry have also entailed coating the gemstone to improve its hue. Mineral A variety of the mineral zoisite tanzanite jewellery is trichroic, which means that light splits into three sections as it enters the gemstone, producing three distinct hues of blue, violet and burgundy. This unique form of refraction has led to Tanzanite jewellery often being referred to as “multi-dimensional”. Being a coloured gemstone, there is no official method of grading Tanzanite. TanzaniteOne has developed its own colour grading system which divides the gemstone’s colours into its various hues, which range from blue-violet to violet-blue. The most common hues of Tanzanite are always blue and purple and, contrary to popular belief, there is no such thing as green tanzanite, which would technically be ‘green zoisite’. Like emerald and other coloured gemstones, tanzanite is graded by eye rather than relying on a magnified inspection; if the examination reveals no inclusions with the unaided eye, then the gemstone is considered flawless. Mohs Scale A relatively soft gemstone, tanzanite is graded as 6 on the Mohs Scale. Being less hardy than other gemstones tanzanite is commonly used within earrings and necklaces, however tanzanite engagement rings which are steadily growing in popularity. Care Simply using a soft cloth after each wearing will ensure that tanzanite is kept looking its best. Additionally, ensuring that harder gemstones such as ruby, emerald and diamond are stored separately from softer gemstones, such as tanzanite, will prevent any scratches and chips from occurring. Birthstone Despite being discovered only recently, Tanzanite has been afforded the title of official birthstone of December.
Next Previous
BLOG CATEGORIES
BLOG ARCHIVE